Before making any investment decision, please read the Key Information Document and the Umbrella Fund Prospectus Including the Fund Rules, which contain detailed and binding information on each fund. These two documents and the latest published audited annual and semi-annual reports in the Slovenian language are available to investors free of charge at the Company’s headquarters and subscription offices. They are also available in electronic format on the website www.generali-investments.si, along with other data and information about each fund. By investing in a subfund, the investor acquires units in the fund and not directly units in an underlying asset in which the fund invests. The subfunds are actively managed and are not managed in reference to an index. Indices are only used to compare the performance of the fund.

Past performance does not predict future returns. Variations in the fund unit values largely depend on the situation in capital markets. As unit values may grow or fall, future returns may be higher or lower than past returns. There is a likelihood that investors may not get back all the money invested in a fund during the saving period. Some subfunds may not be suitable for investors who intend to withdraw their money within less than 5 years. Complete information on the risks can be found in the Generali Umbrella Fund Prospectus Including the Fund Rules and in the Key Information Document. The computations exclude entry and exit charges and taxes that may be levied on the investor and could decrease the presented rate of return; they depend on the personal situation of each investor and may change in the future. The maximum entry charges for Generali Galileo, Generali Rastko Europe, Generali South Eastern Europe, Generali New Markets, Generali Raw Materials and Energy, Generali Technology, Generali Vitality, Generali India – China, Generali Latin America, Generali Eastern Europe, Generali Global and Generali America amount to 3%. The maximum entry charges for Generali Bond, Generali First Selection and Generali Corporate Bonds amount to 2%. Higher payments into a fund are subject to lower entry charges in accordance with the scale of charges published on the website www.generali-investments.si. Generali MM has no entry charges. The maximum exit charges amount to 2.5% and are only levied on payments from a saving package if less than 5 years have elapsed since the initial contribution into a package. Generali Bond, Generali MM and Generali Corporate Bonds have no exit charges. Up to 100% of assets of Generali MM may be placed in money market instruments issued or guaranteed by the European Union, the national, regional and local administrations of the Member States or their central banks, the European Central Bank, the European Investment Bank, the European Investment Fund, the European Stability Mechanism, the European Financial Stability Facility, a central authority or central bank of a third country, the International Monetary Fund, the International Bank for Reconstruction and Development, the Council of Europe Development Bank, the European Bank for Reconstruction and Development, the Bank for International Settlements or any other relevant international financial institution or organisation to which one or more Member States belong. Investors are warned that Generali MM money market fund is not a guaranteed investment, that an investment in a money market fund is different from an investment in a deposit because, unlike a deposit, it carries the risk of a change in the principal amount; that a money market fund does not rely on external support for guaranteeing its liquidity or stabilising its unit value; and that the risk of loss of the principal is borne by the investor. Up to 100% of assets of Generali Bond may be placed in bonds of a single issuer being a state, a local or regional community, or an international organisation. At least 90% of assets of Generali First Selection are placed in units of other funds.

An investment in any of the Generali Umbrella Fund subfunds is not a banking service and is therefore not included in the guarantee scheme for deposits of banks and savings banks.

On 14 January 2013, the Management Company merged the following subfunds:

On 9 June 2016, the Management Company took over the management of nine subfunds of the ILIRIKA Umbrella Fund, merging them, on 3 October 2016, with the Generali Umbrella Fund subfunds (at that time KD Umbrella Fund).

Details on the operations of the subfunds dissolved through the merger are available on the website www.generali-investments.si. 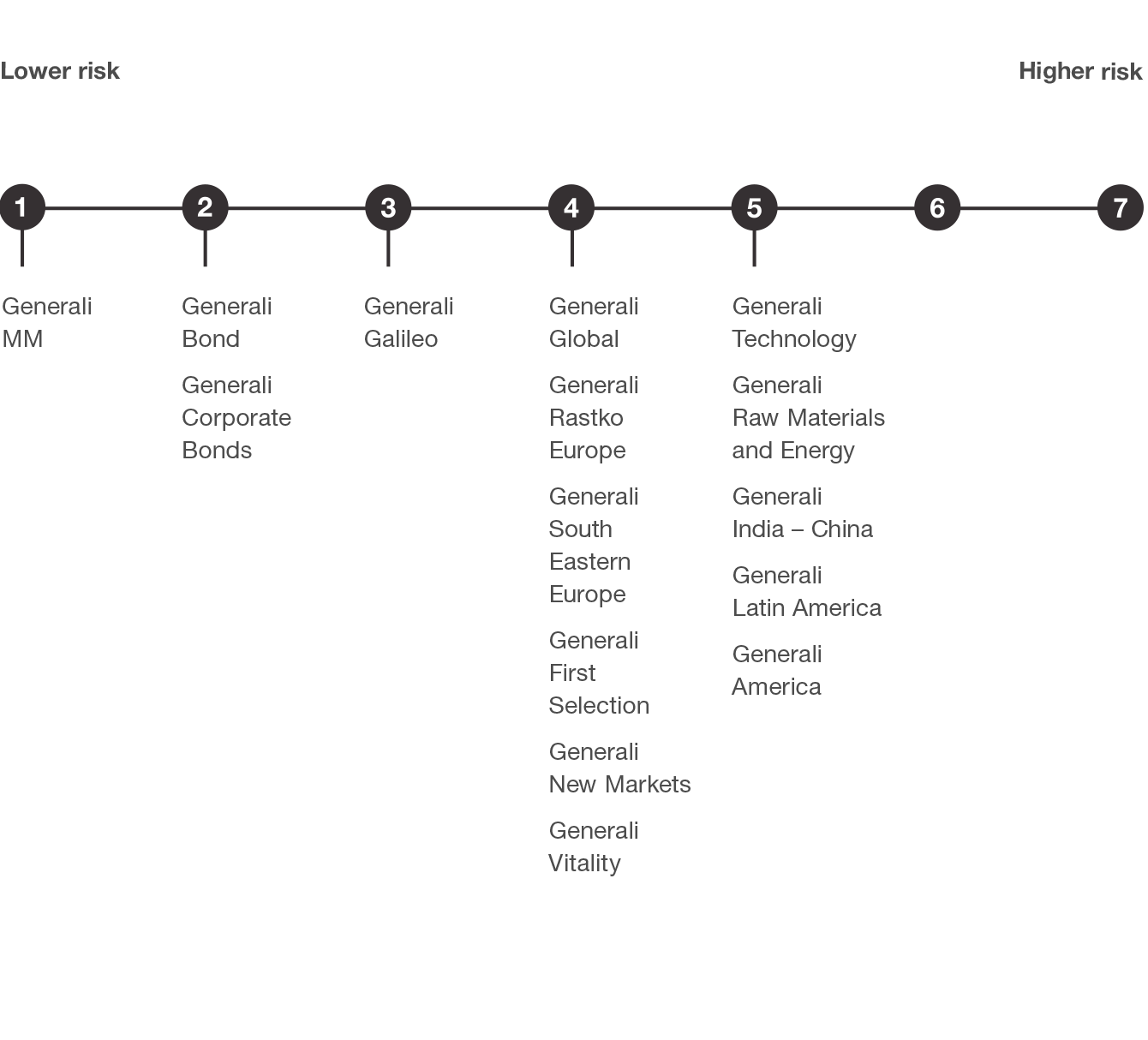 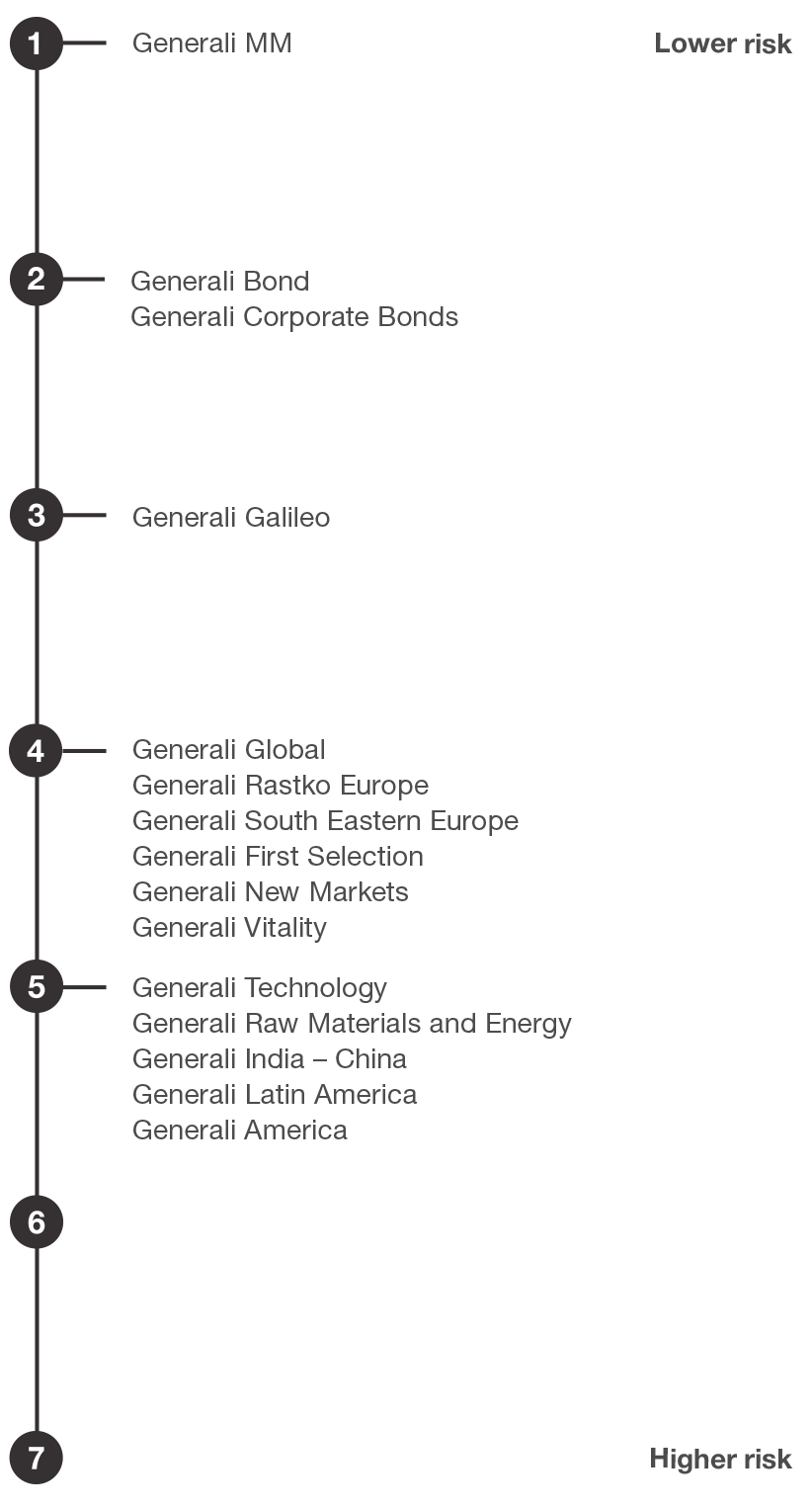 The funds are classified under different risk indicators, with the following numerical scale:

Arrange a meeting with a financial adviser

Enter your contact details and select a FREE appointment at our office, or provide your personal details and we will contact you to arrange an appointment.

* Fields marked with an asterisk are required.